The 2014 Oscars gave us the most retweeted tweet ever – a fact that was reported widely in the news media subsequently. In that respect, the Oscars gave us a striking case study on how social media combines with the conventional news media – both online and offline – to generate pulses of publicity or buzz. To understand how this happens, let’s see first what led to the creation of the ‘most retweeted tweet’.

This year’s host Ellen DeGeneres is no stranger to social media stardom and it was her choice “to take a lot of selfies” during the Oscars event and share them on Twitter. The decision turned out to be a masterstroke, as we now know, even though Twitter was already abuzz with Oscars-related updates. Think of the people around the world on Twitter who had no interest in Oscars and no idea of DeGeneres were jolted to acknowledge the both when they stumbled upon the now-famed selfie – retweeted by over 3 million people.

Interestingly, it didn’t matter if someone missed the selfie on Twitter, for the latter was all over the newspapers, news portals and TV channels for the next few days. Therefore, an idea that was born on live television took a life of its own on the social web, and then came back down to news media, which again made to several social media conversations.

This pulsation of cross-media virality – the buzz ripple – is a product of today’s age when both social and the news media feed off each other; where trending stories on Twitter now make it to the news as fast as developing news stories make it to Twitter. The implications for brand marketers are stunningly huge. It need not matter whether a powerful idea first attracts mass attention – through the conventional media or on digital – for if it is powerful enough, there is a high probability that it will soon generate a buzz ripple across online and offline.

Consider how this scenario played out for Samsung during the Oscars 2014. The former company, as part of its $20 million event sponsorship, had negotiated a product placement deal that involved featuring of Samsung smartphones on the live show. When Ellen proposed taking selfies for the show – she was suggested to use Samsung phones. Everyone who watched Oscars on TV saw Ellen use a Samsung phone for the famous selfie. But the bonanza for Samsung did not end there – it got bigger on Twitter where Samsung was claimed to get 900 mentions a minute at one point. Of course, from Twitter, it found its way back to the news stories like this, which promptly found mentions back on Twitter – creating the buzz ripple.

This phenomenon can be observed on a regular basis although at a reduced level. News is reported on television that generates a intense discussion on the social media, which then finds its way back into the news media, and eventually, ends up back on the social media. Consider how Rahul Gandhi’s TV interview generated the buzz ripple. 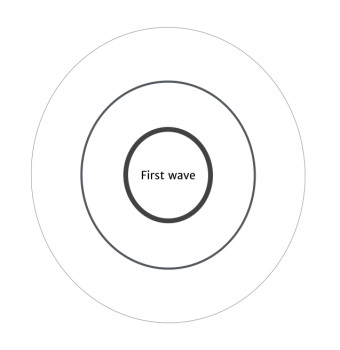 To a large extent, the buzz ripple is a naturally occurring phenomenon that takes a life of its own with voluntary participation by influencers – both in social media as well as in the conventional media. However, there are a few variables that marketers can influence and control with the explicit goal of generating a buzz ripple. As always, the only real challenge is to find and execute an idea that actually has potential to generate a powerful first wave of buzz.